Horseman in heart and soul

Founder Antoon Koenen grew up on a farm in Erp and from a young age he was always amongst the horses. When he was about fourteen years old he started riding at the local riding club. The love of these noble animals has never left him.

Impression of our business

Established in the 80’s

The building of Stoeterij VZ Hackerom
Even after setting up his construction company Antoon always had horses. In 1985 he made the move to a larger scale yard in order to set things up professionally. He called his equestrian business Stoeterij VZ Hackerom, with VZ referring to the name of the street Vogelenzang, in Erp. That is where he grew up. Hackerom is the name of the street where the yard is now based. It began, as always, with just one horse, but that rapidly increased. A passion for breeding using quality horses was born. The team now consists of two full-time and one part-time rider. One full-time rider specialises in training the young horses and the other rider rides the more experienced horses. The part-time rider concentrates on the jumping horses.

Metamorphosis
In 2016 the equestrian complex underwent a metamorphosis. Antoon: “The renovated complex offers far more possibilities. The plan to build an indoor arena had been around since the 1990’s. The indoor arena means that we can now also train the horses in perfect conditions in the evenings and when the weather is bad.”

Flagship horses
If Antoon had to name just one horse of which he is the most proud then that would definitely be the reserve champion of the 2017 KWPN National Mare Inspection: G-Star VZ (Tango x Welt Hit II). This mare is out of an elite mare Raisa (Welt Hit II x Cocktail), who has also produced two other Small Tour horses. 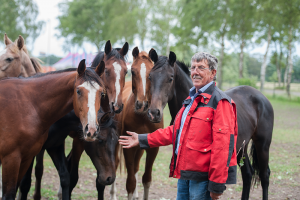 Impression of our young stock